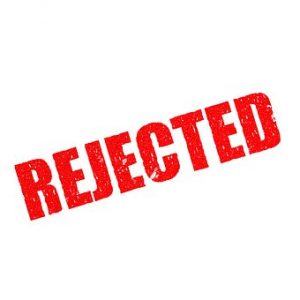 An author never wants to hear the word Rejected.  After spending what may have been many years, working on a manuscript, being told your novel has been rejected can affect your self-esteem and confidence. Many writers begin to question their ability, labeling themselves as failures, not good enough, a bad writer or I don’t have what it takes.

Some will toss their manuscript in a closet, out of mind, out of sight until they find the courage to re-submit it to another publisher. Others sadly will quit writing altogether. The pain was just too much and they don’t want to experience it again.

Surprisingly, many best selling books were rejected many times before finally being published. These authors believed in their novels and themselves as a writer. Not allowing the power of a rejection to discourage them, they continued submitting their manuscript time after time until a publisher finally saw what they had known all along – they had written a good book. These authors proved that dedication and perseverance can pay off.

The surprising list of 7 best selling books that were rejected

After being rejected 12 times “Harry Potter & the Sorcerer’s Stone (Printed in the UK as “Harry Potter and the Philosopher’s Stone) was finally published in 1997. J.K Rowling went on to write six books in the series. More than 400 million have been sold making it the best selling book series in history. Rowling has lived the “Rags to Riches” fairy tale. When her book was accepted for publication, she was told “Not to quit her day job and receiving state aid. Today she’s worth an estimated $650 million.

Carrie was Stephen King’s first book to be published in 1976. After being rejected 30 times It was finally accepted by Doubleday and over a million copies were sold. In 1979 a movie was released under the same name as the book.

Gone With The Wind by Margaret Mitchell

Written by American author Margaret Mitchell, Gone With The Wind was published in 1936 after being rejected 38 times. It went on to win the Pulitzer Prize in 1937. In 1939 a movie was made with the same title starring Clark Gable and Vivien Leigh. Margaret Mitchell sadly died in 1949 at the young age of 48 when she was struck by a drunk driver while crossing the street with her husband to see the movie A Canterbury Tale.

Written by science fiction Author Frank Herbert, Dune was published in 1965 after being rejected 20 times. Dune is said to be the best selling science fiction book of all times, winning the Hugo Award in 1966 and the Nebula award for best book.  Frank Herbert went on to write 5 sequels; Dune Messiah, Children of Dune, God Emperor of Dune, Heretics of Dune and Chapterehouse Dune. the original book has been the inspiration for movies, TV series and computer games.

Lord of the Flies by William Golding

Written by English author William Golding Lord of the Flies was published in 1954 after being rejected over 20 times. A film was adapted from the book in 1954 and adapted for 2 plays in 1963 and 1990. Golding won many awards for his works including the Booker Prize in 1980  and the Nobel Prize for Literature in 1983. He was knighted in 1988.

Ann Frank a victim of the Holocaust, kept a diary while in captivity during World War II. After her death, her diary was found and given to the only survivor of the family: her father Otto. Preserving her legacy the diaries were first published in Germany and France after being rejected 15 times.

Zen and the Art of Motorcycle Maintenace by Rober M. Pirsig

Robert M. Pirsig was considered a genius with an IQ of 170 at the age of 9. The book is a fictional account based on his 17-day journey he made on a motorcycle with his son from Minnesota to Northern California. After being rejected a whopping 121 times it was finally published in 1974. Over 500 million copies have been sold.

53 thoughts on “7 Best Selling Books That Were Rejected”