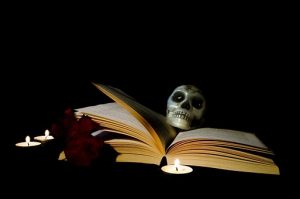 It’s Hard to believe that Halloween is almost upon us once again. It’s time to decorate the house with ghosts, goblins, witches, and skeletons. Carve some pumpkins, light candles and dress up in costume. As a teenager, one of my fondest memories of Halloween was reading horror stories under the sheets with a flashlight. Always making sure I had found the scariest, blood-curdling book to read. But a question I often ask myself is – “Where did Halloween originate from?”

The History Of Halloween

It is believed that the celebration of Halloween Stemmed from the pre-Christian Celtic festival of Samhain – dating back over 2000 years ago. An Irish, British and Northern Europe tradition where people wearing costumes of animals gathered around bonfires offering sacrifice to the dead. Over time the costumes changed to ghosts and demons to scare off the dead that they believed had returned to earth.

It has been said that the poor and the children dressed in costume and went door-to-door offering a prayer for the dead in exchange for “Soul Cake” and other treats and eventually evolved into what we now know as Trick-or-Treat today.

Halloween did not become popular in the U.S until after World War Two when some of the traditions were practiced by early Irish Immigrants.

Now that you know the history of Halloween, it’s time to grab a flashlight and read some terrifying books under the sheets. I’ve composed a list of my favorites. Happy Halloween Everyone!

IT – By Stephen King

I could mention any of Stephen King’s novels for this entire list but decided to mention “IT” because currently there is a movie playing in theatres based on the book.  A terrifying classic about seven adults, who made a promise twenty eight years ago, when they were teenagers to return to the small town of Derry Maine. A town where they confronted a nightmare which they named IT. Now children are being murdered again and the seven adults have to prepare themselves to battle the monster lurking in the sewers of Derry.

Frankenstein was written by Shelley in 1818. A true horror classic. The modern books we read and the movies we see about Frankenstein today are nothing like her own original writings. It is for this reason that I am listing this copy. An uncensored version of Shelley’own original script.  A must-read for any  Frankenstein fan.

The Nightwalker by Thoma Tesler

A psychological thrill-ride of a book that will keep you on your toes. Leon suffered from insomnia and turned to violence as a sleepwalker. After treatment for his condition, he believed he had been cured – but years later Leon’s wife disappears. Did Leon have a relapse?  He needed to find out and attached a camera to his forehead, activated by motion. What he discovered is beyond his wildest imagination and leads him into a world of darkness.

The Witches of Prague And Other Stories By F.Marion Crawford

A collection of short stories that will give you goosebumps, keep you up all night and have you looking over your shoulder.  It’s nice to have in one book, all of the Crawfords supernatural chillers that were originally printed in the late 1800’s. Titles include: The screaming skull, For the Blood is Life, The Doll’s Ghost, The Dead Smile and The Witches of Prague.

The Exorcist By William Peter Blatty

Originally published in 1971 and spending fifty-seven weeks on the New York Times bestseller list – seventeen of which at number one. Two years after it was published a now famous movie was made. Based on a true story of a child’s demonic possession in the 1940’s. A book that is terrifying, raw and gripping.

The Amityville Horror By Jay Anson

The true tale of an American dream that turned into a nightmare. In December 1975, the Lutz family moved into their new home. Knowing that one year earlier, Ronald DeFeo had murdered his parents, brothers, and sisters in the house – but the price was too good to pass up. Twenty-eight days later, they fled in terror. The terrifying story of a house possessed by evil spirits. A gripping page-turner, you won’t be able to put down.

When a wealthy newspaper publisher is told he is going to die. His dying wish is to is to establish the facts after death. Together with a physicist and two mediums, they spend one night in the abandoned Belasco House in Maine and learn why the locals call it the Hell House. A tense book that will have you on the edge of your seat.

The Haunting of Hill House By Shirley Jackson

First published in 1959, the supernatural thriller is the story of four seekers looking for evidence of a “haunting” in the Hill House, owned by Dr. Montague. At first, their visit is mild and seems to be merely a spooky encounter. But the house is gathering its powers and will soon choose someone to make its own.

A Haunting By L. I. Albemont

A dark horror story of Sarh Faust trying to flee her troubled past. Faust finds a neglected three-hundred-year-old townhouse that seems perfect to start over.  But all is not what it seems to be. Something has been there for a very long time and refuses to stay buried. A spine-chilling horrific story.

Scary Stories To Tell In The Dark By Alvin Schwarts

A three-book collection for the kids.  The classic spooky tales have been reprinted with new artwork. Exceptional books for the young readers. Whats’ better than curling up with your kids and reading horror books on Halloween night.

These are a few of my favorite horror books. Let me know in the comments below, your favorites.

Other links that may interest you

How to overcome writer’s block by The Rustic Elk

How to write a story outline by lifeofastoryteller