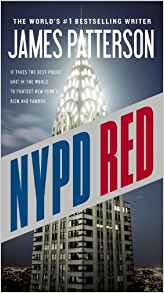 I’ve  read many of James Patterson’s books – this one is the latest and without fail, he delivered. Known for writing fiction murder/mystery,  this series fits the bill. This is the 1st book in the series of five. Published in 2012, this has been on my “To Read” list for some time. It seems that list keeps getting longer.

About the Authors – James Patterson

James Patterson – born March 22nd, 1947 is an American fiction author, famous for his murder/mystery novels. Known to be one of the highest paid authors with an annual income of $95 million and selling more than 300 million books worldwide.

(Copied from “About Author” page) Marshall Karp has written for the stage, screen, and TV. He is the author of The Rabbit Family and three other mysteries – featuring LAPD detectives Mike Lomax and Terry Biggs.

It’s the start of the Hollywood on the Hudson festival and New York City os swept in glamour. There’s a red carpet premiere every night; the most exclusive restaurants are filled with wealthy producers and preeminent directors; thousands of fans gather with the paparazzi hoping to catch a glimpse of the most famous and beautiful faces in the world. With so many celebrations in town, special task force NYPD Red is on high alert – and it can’t afford to make a single mistake.

Then a world-renowned producer fatally collapses at his power breakfast and top NYPD Red Detective Zach Jordon is the first one on the scene. Zach works with his beautiful new partner, Detective Kylie MacDonald – who also happens to be his ex-girlfriend – to discover who the killer might be. But this is only the beginning: the most brutal, public, and horrifyingly spectacular crimes they’ve ever encountered are about to send all of New York into chaos, putting NYPD Red on the ropes

Zach and Kaylie know there’s no telling what a killer this deranged will do next. With the whole world watching, they have to find a way to stop a psychopath who has scripted his finale down to the last explosive detail. Combining larger-than-life action, relentless speed, and white-knuckle twists,  NYPD Red is the most mega-blockbuster from “The Man Who Can’t Miss” (Time).

Like most  Patterson’s books, this was a fast read – suspenseful, fast-paced thrilling page-turner. I was Immediately drawn into the book with the sudden mysterious death of a famous detective and knowing Patterson’s style. more deaths were to follow.

Patterson brings Hollywood and New York together, with the crimes being committed in New York amongst Hollywood’s elite celebrities and producers. The story is told from NYPD Red Detective Zach Jordon’s perspective and the serial killer Gabe. Reading the book, I was thrown into the world of a madman, learning about his warped thoughts and sick mind. A wannabe movie writer/ director who has had all of his work rejected decides to write and direct his own movie with him as the star and a huge finale that must be stopped.

The book was action packed from beginning to end with a growing hatred for Gabe. Patterson developed his characters exceptionally well – I  felt like I knew them and was not disappointed. It was a simple, fast read and easy to follow and I’m looking forward to reading the other books in the series.  I highly recommend this book.

CHARACTERIZATION – Builds characters well, by the end of the book, I felt as if I knew them – 5 Stars

Because I enjoy reading so much – I offer for free at this time, Book reviews,  Guest Author Interviews, and Beta reading, If you are interested in any of these, please email me at tinahogangrant@gmail.com for more information.

Purchase the series from Amazon – If you are interested in reading the NYPD Red series,  click on the images below to purchase from Amazon