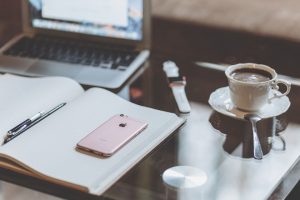 My life for the past three months

If you’ve been following my blog, you’re probably aware that I received my book “Reckless Beginning” back from the editor in September. We are now in December and I honestly can’t believe I’ve been working diligently on my edits for three months. After my normal eight-hour day job, I’ve been spending the rest of my days going through the manuscript in dept. Making changes, checking grammar, tweaking and polishing it. The editing process is much more intense than I had anticipated and lately, I’ve felt like I’m drowning and ready for a much-needed break.

When I’m home, my computer sits at my desk screaming for attention, my edit notes pinned to my wall, pop out at me as I walk by and my head is constantly telling me you have 3 hours till bedtime – you can do some editing.  Unable to relax at home, without feeling the pressure, I was in dire need of an escape.

The thought of a weekend get-away was appealing, but I didn’t want to take it alone. Normally my husband and I take separate vacations, I went to England one year and the year after Ireland – both alone. We love animals and are paying the price. We have six falcons (my husband is a professional falconer and does bird abatement for a living.) We also have five chickens, one-hundred-fifty pigeons, and two dogs.  Trying to find someone to take care of our little farm – so we can go on a trip together is almost impossible – thus we vacate separately.  But the intense hours I’ve been working on the book has also taken time away spent with my husband Gordon. A weekend away from the book and quality time with Gordon is what I craved.

An offer we couldn’t refuse

So, when my sister-in-law, Pam joined us for Thanksgiving and offered to watch our animals, we jumped on it and planned a road trip to Bishop the following weekend. A small mountain community located in the Eastern Sierra’s of Califonia which I’ve always wanted to visit. Surrounded by lakes and a spectacular view of Mount Whitney – the highest summit in the contiguous United States, with an elevation of 14,505ft, it promised to be the perfect place to spend a weekend.

From our house, the drive to Bishop is roughly fours hours. Ha! who are we kidding? There is so much to see on the journey, that it actually took us eight hours. 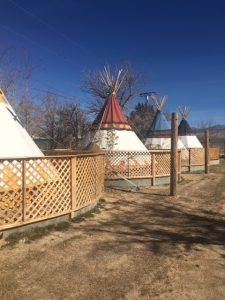 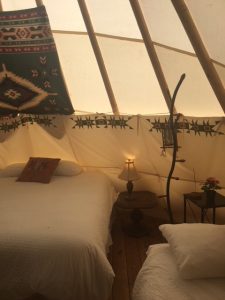 Driving down highway 395, we spot a row of teepees. With brakes screeching, we slid off the highway to check them out. We were greeted by the staff, who happily gave us a tour of what happened to be an RV  and Teepee park. A place where you can spend the night in a teepee. How cool is that! I was already planning our next road trip. The teepees were spacious and clean, the view of Mount Whitney was spectacular. I was sold and told the manager we’d  be back for a weekend in the near future. 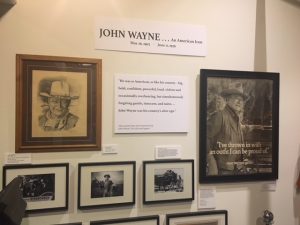 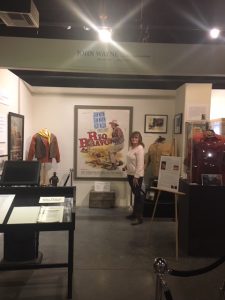 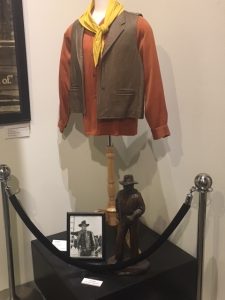 After spending an hour checking out the teepees, we get back on the road, only to pass by the Museum of Western Film History an hour later. Being a huge fan of westerns and John Wayne, we had to stop. An amazing tour of movies made in the area, along with costumes and props, including my hero John Wayne, Roy Rodgers, Lone Ranger, Hopalong Cassidy, Dale Evans and so many more, it was well worth the stop.

Lucy was the tourist attraction at Alabama Hills 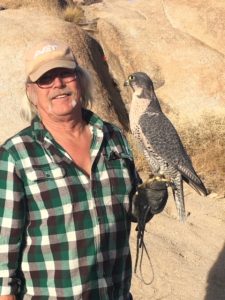 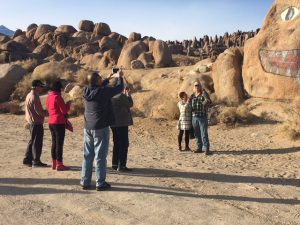 After eating lunch in Lone Pine, we finally get back on the road,  only to make another stop at Alabama Hills – an amazing recreational area with an unbelievable scenery of rounded rock formations. A popular filming location. I had forgotten to mention, that “Lucy” – one of our falcons accompanied us on our trip. Being our prized falcon, we decided to keep her in our care. Visiting Alabama Hill with Lucy was one of the highlights of the trip, she was the star attraction. Tourists soon forgot about the landscape they were there to see and instead began snapping pictures of Lucy. It was hilarious, one tourist even gave my husband a dollar!

Just in time for the Christmas Parade 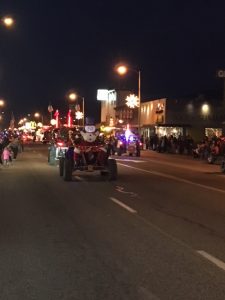 We finally pull into Bishop, eight hours after beginning our trip, only to discover the town festive with Christmas lights and music. The main street bustling with people and hot chocolate and cider served outside most of the stores. Turns out the Christmas parade was about to start. A perfect way to end the day. 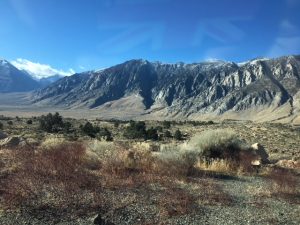 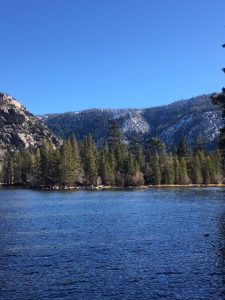 The next day was spent visiting the magnificent views surrounding Bishop, June Lake in particular.  This is what I had been yearning. Isolatioation, tranquility, and peace. Not once, did I think about the book, the plot or the characters. Removing myself entirely from the existing pressures of editing was rejuvenating and re-fueled me for the future editing tasks that lay ahead when I return home.  Spending time with Gordon was also precious. We reconnected and made memories – something we haven’t done lately.

With the trip now behind us, I’m back to editing the book, but with a better frame of mind. I’m able to think clearer, write better and make better use of my time. I don’t feel so pressured, my moods have improved – much to Gordon’s liking and I’m excited about getting through the editing stages of the book. The weekend road trip was the answer to many issues that existed and I wasn’t aware of.

What have you done to escape the editing blues? I would love to hear them.