Tina Hogan Grant will be the Grand Marshall at the Fiesta Days Parade in Frazier Park CA.  Event Info

Grant’s debut novel Reckless Beginnings, was published in October 2018 and is based on true events that have happened in the author’s life. Focusing on the flip side of addiction and how the loved ones of addict’s lives are affected. The book has been received well with appearances on Santa Clarita Home Town Radio, KBAK Bakersfield News, Voyage LA Magazine, KVPR Radio and even an interview the Ilkley Gazette in England where grant grew up.

Tina was born in England and moved to the United States in 1979. She is the youngest daughter of science fiction author, James P. Hogan. After moving to California, she became a commercial fisher-woman and spent ten years fishing off the southern coast of California with her husband Gordon. After retiring from fishing, they moved to Frazier Park and spent the next ten years building their dream home, doing most of the work themselves.

She loves being a part of this small community and couldn’t imagine living anywhere else. “This is and always will be my home,” Grant says. “It is an honor to be the Grand Marshall in the parade this year. Thank you, Frazier Park, for your continued support.”

Tina is currently working on a sequel, titled Better Endings, with plans of its release to be in October 2019.

The third book in the series, titled The Reunions, is scheduled to be released sometime next year.

Grant will be holding a raffle. The prize includes a signed copy of her book, a signed poster, a magnet and a $20.00 Amazon gift card.

Grant will have signed copies of her book available for purchase at a discounted price. 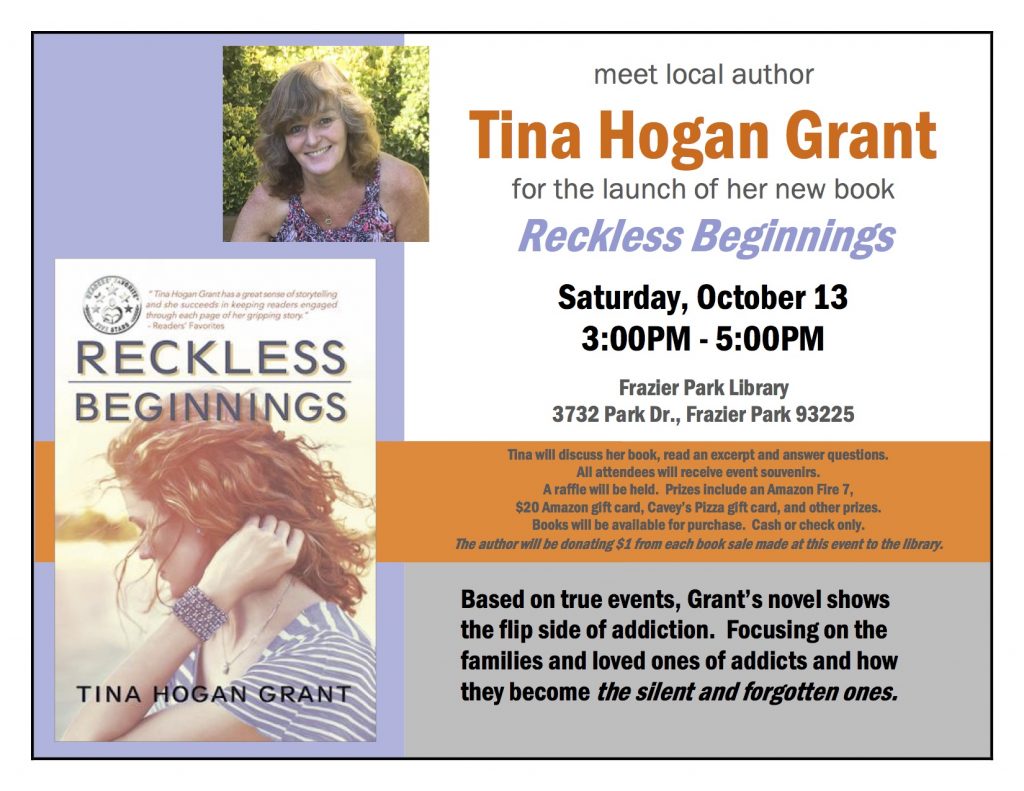 Local author invites the community to a book launch and signing event.

The event will be held at the Frazier Park Library, 3732 Park Drive on Saturday, October 13th at 3:00 pm. Admission is free. Snacks and beverages will be served. Grant will discuss her book, read an excerpt and answer questions. All attendees will receive event souvenirs. A raffle will be held at the event. Prizes include An Amazon Fire 7, a $20.00 Amazon gift card, A Cavey’s Pizza gift card, and other small prizes. Books will be available for purchase for $15.95. Cash or check only.  In appreciation for hosting the event, Grant will be donating $1.00 from each book sale to the library.

Twenty-five years in the making; Grant’s novel, Women’s fiction, based on true events, shows the flip side of addiction. Focusing on the families and loved ones of addicts and how they become The Silent and Forgotten Ones.

Written from the author’s own experience, Grant explains; even though these events took place decades ago, today drug and opioid addiction continues to spiral out of control and is at an all-time high. Heroin usage has hit a record high because it’s much cheaper than prescription drugs and can be easily bought on the streets.

We hear about these numbers all the time, but we never hear about the loved ones of addicts and how their lives have been affected. Every day is a fight for survival. Normality doesn’t exist. As the addiction intensifies, so does the abuse and violence.

Grant’s novel, RECKLESS BEGINNINGS is one woman’s story, (Tammy Mellows) trying to make sense of the chaos surrounding her life and fighting to gain it back. A strong woman hides her tears from the rest of the world.  Her journey shows that anyone in these situations has choices and that they don’t have to settle.

Grant, commercial fisherwoman turned author was born in England and came to the States in 1979. After moving to California, she spent ten years fishing off the southern coast of California with her husband Gordon. After retiring from fishing, they moved to Frazier Park in 2003 and spent the next ten years building their dream home, doing most of the work themselves.

Grant is currently working on a sequel, titled BETTER ENDINGS.