Finding myself stranded and unprepared - don't let it happen to you
Skip to content
December 31, 2017January 6, 2018 Tina Hogan Grant 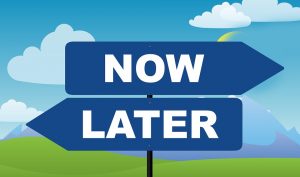 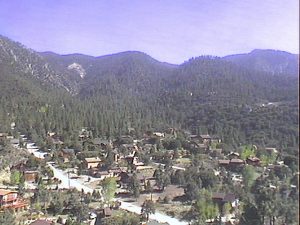 That morning I had plans drive to Pine Mountain Club – another small mountain community, less than nine miles away. I had plans to help a friend get ready for the holidays. The skies were blue, there were no winds but it was rather chilly – fifty degrees. I dressed in jeans, a t-shirt, sweatshirt and leather knee-high dress boots with a low heel. The thought to bring a jacket crossed my mind but that’s as far as it went and I left without one.  There was speculation of a light dusting of snow by late afternoon and  I planned to be home before then. 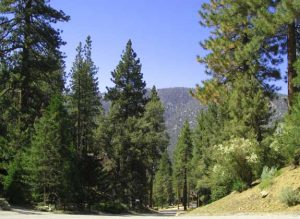 As always, it was a beautiful drive to Pine Mountain club and took me about twenty minutes. The roads were clear, the scenery was stunning – I felt blessed to live in such a beautiful place. 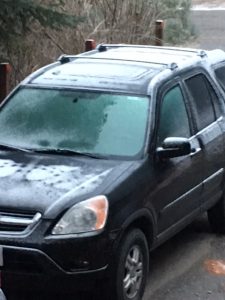 As I’m getting ready to leave and head home, it begins to snow lightly and my car now has a light dusting of snow. Having driven in much worst I wasn’t concerned. However, the short walk to the car was brutal, the harsh cold air tore at my skin. the temperature had dropped to thirty-three degrees. Dashing to my car, I wished I had brought my jacket – first mistake.

The roads begin to ice up

Mil Potrero – the road going out of Pine Mountain Club is narrow with sharp curves that cut into the hillsides and the climb is steep as you leave the town. The first part of the drive was like any other, the roads were fine, gradually turning white from the snow falling. I decreased my speed and made the first hill just fine with no issues but the temperature continued to drop rapidly. Ten minutes into my drive, it was now twenty-eight degrees and the snow on the road was beginning to turn to ice. Having four-wheel drive, I felt confident I would make it home. 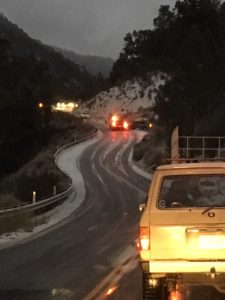 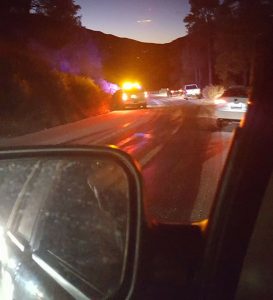 I cautiously approach the second hill, driving fifteen miles per hour, following a car also doing the same speed. Up ahead I can see flashing lights, cars on the wrong side of the road and cars sliding out of control, down the hill. Like the other drivers, I come to a stop and watch in horror, the chaos in front of me.  Cars attempting to go up were slipping back down and those coming down were sliding into embankments and other cars.

Within five minutes a fire truck pulls up behind me with its flashing red lights on, the fireman approaches my car and tells me not to attempt to drive up the hill, it’s like an ice-skating rink. He informs me that the county has been contacted to come out and cinder the road and hopefully it won’t be too long.

While my car is idling, I notice I’m low on gas – under an eighth of a tank – another mistake. The temperature has now dropped to twenty degrees. Concerned about my gas, I turn off my car and call my husband to let him know the situation and as soon as they have cleared the road and cindered it, I should be on my way.

Things I wish I had

Within twenty minutes of sitting in my car with no heat, I’m freezing. My fingers and toes are numb. I’m shivering, rubbing my hands together and stomping my feet. I look at my back seat for anything that may add extra warmth, I have nothing. No hat, no gloves, no extra socks and no blanket. Now I’m wishing I had packed those emergency supplies for my car. I have half a bottle of water and no food. And being one that hates to sit still for long periods of time, a book would have been really good right about now – another item to add to the list.

After shivering for an hour, I start up my car to generate some heat. Within minutes hot air blasts my body, bringing my fingers and toes back to life. I hold my face in front of the heater for a few minutes, enjoying the sensation of my face defrosting.

Soon after the fireman returns with bad news. There are a total of twelve cars blocking the road up ahead that have slid into each other and need to be towed out. Problem is, the tow trucks can’t even maneuver, they are sliding too. But that wasn’t the worst of it, he also informs me that the county will not be out to cinder the road tonight due to budget cuts and unapproved over-time. how can the city not come out? We have a multi-car pile-up and over seventy cars stranded! Why am I paying taxes! I was livid. The road was now shut down. No cars could leave or enter the highway. Search and Rescue was being dispatched to take stranded drivers to the Pine Mountain Clubhouse – that’s eight miles in the other direction. What good would that do me? How would I get my car, when the road is finally open?

What are my options?

I called my husband, who was now parked at a place we call the “Y” at the end of the road I’m stuck on. It’s about three miles from where I’m parked. He along with dozens of other cars, that were not allowed to go any further. We discuss my options. Option one –  have, Search and Rescue, take me to the clubhouse. I scratched that idea.      Option two – Stay in my car all night.  I would freeze to death. Option three – Hike toward the “Y” – which was a three-mile up-hill hike. I decide on number three. My husband said he would start walking my way and to keep to the right of the road.

After being stranded in my car now for almost four hours, I prepare myself for the dreaded hike, disgusted with myself for being unprepared for such an incident, I blast my car heater one last time and commend myself for finding a flashlight on the dash. I flag down the fireman, to let him know I was going to hike out. Concerned and shocked that I would attempt such a task, he eased up a little when I told him my husband was at the “Y” and would be hiking toward me. He asked if I had some warmer clothes or a jacket, in shame I tell him no. He leaves and returns with a blanket for me and also radios to the CHP at the other end, that a single female is hiking out.

I begin the hike

I thank the fireman, lock my car, wrap myself in the blanket and illuminate the road with my flashlight. It’s now 9:00 pm and nineteen degrees. Unable to walk on the icy road, I walk on the uneven dirt to the side. Within five minutes, my face is aching from the cold. I wrap the blanket tight around my face so only my eyes are showing and hike baby steps so I don’t slip.

Climbing uphill is slow and treacherous and when I turn the first corner I am flabbergasted by what I see. Stranded cars are parked everywhere some with people sitting inside, waiting for Search and Rescue. Others have left their cars, wrapped in blankets and coats trying to flag down any kind of help. Tow-trucks are trying to reach wrecked vehicles. I was stunned by the mass of people affected by the ice storm.

For the next forty minutes, I continue my hike, wondering how much further I have to go. I’m tired, thirsty, my body aches, I no longer feel my feet and I’m pushing myself with every step when suddenly I hear someone call my name. I stop in my tracks, and with the flashlight I scan the area, looking for my husband. I hear my name again, and a CHP car pulls alongside me. The officer winds down his window more and asks if I’m Tina. Sitting next to him is my husband. With a beaming smile – knowing my hike has finally come to an end, I tell him yes and take a seat in the back of the warm patrol car.

Heading back to the “Y” my husbands tells me how he flagged down the officer and explained to him that I was hiking out alone and he and the officer began their search for me and where they had picked me up, was the stopping point for the patrol car, because they too were sliding all over the road and the officer was afraid to go any further . I finally arrived home at midnight – eight hours after I had left Pine Mountain Club. 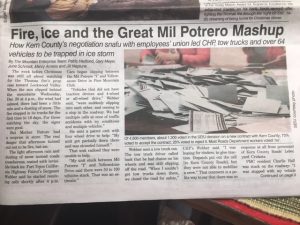 Don’t let this happen to you

This event certainly prompted me to stock emergency supplies in my car and be prepared for events where I may find myself stranded or even stuck in traffic on the freeway due to an accident or fire. My supplies consist of:

Take it from me, no matter where you live, you may someday find yourself in a situation where you are stranded or stuck in traffic. Make sure you are prepared and have some supplies on hand.

Have you ever found yourself in such a situation, were you prepared? I’d love to hear your stories.

48 thoughts on “Finding myself stranded and unprepared”