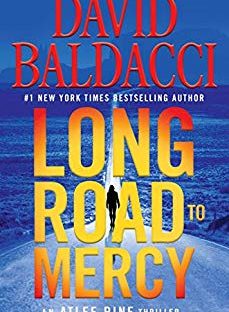 My book club which is held at our local library recently finished this book and discussed it at our last meeting. As always I like to share our thoughts with you.

David Baldacci has been writing since childhood when his mother gave him a lined notebook in which to write down his stories. (Much later, when David thanked her for being the spark that ignited his writing career, she revealed that she’d given him the notebook to keep him quiet, “because every mom needs a break now and then.”)

David published his first novel ABSOLUTE POWER, in 1996. A feature film followed, with Clint Eastwood as its director and star. In total, David has published 37 novels for adults; all have been national and international bestsellers and several have been adapted for film and television. His novels have been translated into more than 45 languages and sold in more than 80 countries, with over 130 million worldwide sales. David has also published six novels for younger readers.

David received his Bachelor’s degree from Virginia Commonwealth University and his law degree from the University of Virginia School of Law, after which he practiced law in Washington D.C.

It’s seared into Atlee Pine’s memory: the kidnapper’s chilling rhyme as he chose between six-year-old Atlee and her twin sister, Mercy. Mercy was taken, Atlee was spared.

Three decades after that terrifying night, Atlee Pine works for the FBI. She’s the lone agent assigned to the Shattered Rock, Arizona resident agency, which is responsible for protecting the Grand Canyon.

So, when one of the Grand Canyon’s mules is found stabbed to death at the bottom of the canyon and its rider missing- Pine is called in to investigate. It soon seems clear the lost tourist had something more clandestine than sightseeing in mind. But just as Pine begins to put together clues pointing to a terrifying plot, she’s abruptly called off the case.

If she disobeys direct orders by continuing to search for the missing man, it will mean the end of her career. But unless Pine keeps working the case and discovers the truth, it could spell the very end of democracy in America as we know it…

This was another book that created mixed feelings amongst the group. First of all, I don’t think any of us realized before reading it that it was the first book in a series  (An Atlee Pine Thriller Book 1). The book was pretty much the setting foundation of the main character, Atlee Pine by way of what some of us thought was a very confusing and mixed storyline. Others in the group loved it and even brought more of his books after reading this one.

That’s what I love about book clubs. They will take you away from your comfort zone and the genres you normally read and many times introduce you to new authors that you’d probably never discover if it wasn’t for being a suggestion at the book club

Anyway back to the book. We all agreed, the book pulled us in straight away. It began with Atlee’s interrogation in a high-security prison where only the worst of criminals were housed. She believed the prisoner was the man who took her twin sister over thirty years ago.  The first few chapters of the book gave the impression that this was going to be a story about Atlee trying to get to the bottom of what happened to her sister.  Sounds good, doesn’t it? I was on board and wanted to know too what happened to her.

Suddenly the story switched gears and it’s now all about a dead mule that was found at the bottom of the Grand Canyon and the missing rider. None of this had anything to do with how we were pulled into the book in the beginning. It was almost like two stories thrown into one book.  I and a few others in the group kept reading hoping it would shift back to the case of the missing sister but it didn’t. A huge disappointment for me and I soon began to lose interest in the book. I almost felt like I had been deceived by the switch and bait method that was used to draw a reader in.

The ending was also a disappointment for some of us because it ended with a cliff hanger. I, in particular, wasn’t pleased with the unfinished ending.  When I invest my time in a book, I expect a complete story and not be forced to buy the next one. I’ve never like this tactic and think it’s highly unfair to the reader. When an author tends to do this, I personally will not read their books.

Overall, some members loved it and are anxious to read the next book in the series which is currently available to pre0ordr on Amazon by the way. Others like myself didn’t care for it.

CHARACTERIZATION – 4 STARS – The characters were well developed and Atlee had some interesting traits for a woman. She was a tough woman – written almost like a superhero.

STORY & PLOT 3 STARS – We had mixed feelings about this as explained in the review. A few loved it and others hated the tease and unfinished story.

OVERALL RATING – 3 STARS – I personally would not recommend this book because of the cliff hanger.