Balancing an armload of mail, an overloaded briefcase, and a gym bag with two yogurt cups teetering on top, Dierdre Clancy rushed to her cubicle. For the fourth time this week, and the umpteenth time this month, she was late. Once again, a power outage in the decrepit apartment building where she lived had caused her alarm clock to fail.

The yogurt cups threatened to topple off the gym bag. Dierdre wasn’t about to let her lunch decorate the linoleum. The mail showered to the floor. The briefcase hit her foot. With her free hand, she plastered the cups to her side. The gym bag slid down her arm. The webbed strap twisted, tourniquet style, around her wrist.

She managed a couple of sideways hops that brought her to the edge of her desk. The gym bag swung wildly. Leaning against the arm weighed down by the bag’s stranglehold, she managed to dump the yogurt cups onto the desk without mishap. She pulled herself upright and reached for the strap at her wrist.

Somehow, during all the hopping, the bag had swung around her legs and gotten wedged in the narrow space between her desk and file cabinet. The same strap that cut off circulation to her hand pressed into the backs of her knees, pinning her neatly to the desk. Only an act of extreme dexterity could save her from her own folly. Imbecile, why didn’t you make two trips?

Because I didn’t want to risk having the boss see me coming in late.

Dierdre’s heart hit the ceiling. She knew the shout—a cross between an operatic tenor and a pig at slaughter. Still, she hadn’t been prepared to hear her boss’s screeching quite so soon.

Hero Bio: Adam Talcott was born rich. He went into business with his best friend from college and made even more millions. His methods may be unorthodox, but he nearly always succeeds. Now he’s been challenged to live for two months without any of the privileges and resources he’s known all his life. Adam is confident that he can conquer this challenge as he has all others. But he didn’t count on Dierdre Clancy and that danged cat.

Heroine Bio: Dierdre Clancy grew up in a family of givers. Her parents were missionaries and often too busy saving other, less privileged people to realize how lonely and abandoned Dierdre felt. When she reached her teen years, she was shipped back to the USA to live with her Aunt Shea on Shea’s rundown farm and animal shelter. Finally, she was in a stable environment with an adult she could count on. Dierdre went on to gain a degree in social work and took up the Clancy family tradition of helping others. Most of the time helping others was easy. But Adam Talcott broke that mold and every other box she tried to put him into. How could one man be so difficult to manage?

Hi, I’m Rue Allyn, I write heart-melting romance novels. Books about characters and adventures in which love triumphs at the darkest moment. The kind of hopeful, steal-your-breath romance that melts a reader’s heart. The type of book I like to read. Hope you will too.

Yes, time travel is possible. How? Read a book. The old-fashioned kind of book, made from paper, isn’t technically a machine, so no Time Machine is required. However, for purists, we have computers, tablets, cell-phones, dedicated reading devices and a whole host of other machines that can transport you back in time via the printed page (or screen if you prefer).
Now some may protest that reading about the past is not traveling there. I won’t argue. For me, reading about the past or stories set in the past is a transportive experience. Lately, I’ve been transported to Wyoming territory in the year 1875. Much was going on at that time. The Lakota nation was fighting for its rights to its holy lands and hunting grounds. Gold had been discovered in the Black Hills–smack in the middle of those holy lands. Settlers were pushing westward at the urging of the Union Pacific railroad.
The railroad needed passengers, and it held rights to land along the path of the railway. Land that the railway owners hoped to sell to settlers at a huge profit. If all of that wasn’t enough fights were brewing not just among the Lakota and the settlers but between cattlemen, sheep owners, and farmers. Stagecoach and railway robberies were commonplace and towns sprang up to provide services to the far-flung ranches, farms, and mines
Use that marvelous time machine, the internet, and drill down a layer or three on any one of these topics and you find time travel gold. Be present at the skirmishes that led to the Battle of Little Big Horn and later to the tragedy at Wounded Knee. Get shaken to the bone on a runaway stagecoach as it flees road agents who to steal everything on board, including your own personal treasures. Follow Ferdinand V. Hayden (surveyor), William Henry Jackson (Photographer), and Thomas Moran (artist) and their party as they survey what is now Yellowstone National Park. They “compiled a comprehensive report, including large-format photographs 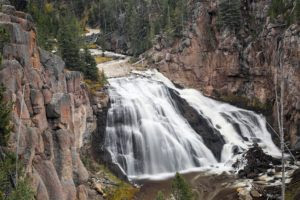 by William Henry Jackson and paintings by Thomas Moran. The report helped to convince the U.S. Congress to withdraw this region from public auction,” and by 1872 President U. S. Grant signed The Act of Dedication law that created Yellowstone National Park. Jackson’s photographs were of particular interest to me even though I’d visited the park in person twice.
My most recent time travels took me to the trail from Laramie to Devil’s Tower. I caught a ride with a muleskinner who was making deliveries from the railhead at Laramie to outlying ranches. This particular skinner had a good relationship with the Lakota, respected their lands and would trade with them honestly. No cheating, no shoddy goods, no spoiled stores. The skinner had earned the trust of the Lakota bands that lived in the area of Devil’s Tower. That was a feat few settlers could manage, simply because prejudice and ignorance took precedence over common sense and courtesy. Sadly my mule skinner didn’t spend long with any one group, so I didn’t learn much about the Lakota other than that they were folks with the same kinds of worries, hopes, and dreams that most folks have. I did learn quite a bit about the low-lives taking advantage of not just the Lakota but every person who gave trust too easily. That’s how I discovered that my mule skinner–a major character in my current work in progress–falls victim to the machinations of a villain who is actually trying to increase tensions between the Lakota and the settlers. That villain figures that he can get land at very cheap prices if the area is deemed unsafe. Then he can have the army clear the Lakota off their lands and lay claim to those too.
All of this, we normally call research, is what I call time travel. The great thing is that anyone can do it. So the next time you go online or pick up a book ask yourself not what you want to know, but instead, when you want to be. Please leave a comment and share some of your time travel experiences.

Freebie~~Get a FREE download of Rue Allyn’s May 2019 release Forever Hold My Heart, a Scottish historical novella. Just sign up for her newsletter here https://www.rueallyn.com/ravonsubscribe/.

Other features you may enjoy

Come join my Facebook Group where you can enter to win prizes, meet other readers and recommend books