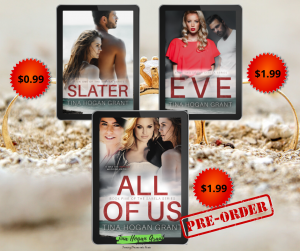 Preorder All Of Us – The Sabela Series Book 5

“All Of Us” The Sabela Series Book 5 is now available for preorder! (eBook format) Grab it for the discounted price of just $1.99

Like all of my books, this one can easily be read as a standalone but if you want to follow the six best friends on their journey of ups and downs and of course romances then I recommend reading them all.

All Of Us Blurb

An uninvited guest makes an appearance.

While one life is being threatened, another one is lost.

How did this happen?

Why did this happen?

It was a special day for the triple wedding ceremony.

Slater, Sabela, Travis, Claire, along with Ricky and Jill were getting married on the same day.

Everything seemed perfect and had gone according to plan until the terrifying moment when the intruder entered the room.

A hysterical guest’s confession revealed shocking lies told in the past.

Would the others be able to forgive?

What would become of the circle of friends that had shared so much together, including their wedding day?

Will they be able to stay together? Or will what they discover, be too much to overcome?

And this is the link to preorder All Of US

If you want to see all of the books in the series click here.

And don’t forget – if you belong to Kindle Unlimited you can read books 1-4 for free and the prequel Davin.

Read today!
Here she is! The Second Edition of Reckless Beginnings with a new improved cover.
I finally have the rights back and In a few days, it will be available on Amazon in ebook and Paperback. If you belong to Kindle Unlimited you will be able to read it for free.
The Blurb
BOOK ONE OF THE TAMMY MELLOWS TRILOGY
She wanted the American dream…
…but got a nightmare.
How will she survive and protect her child?
Tammy’s had a plan. Move to the U.S. and follow the white picket fence dreams she’d always had. Steven seemed nice, but there were clues she’d missed. He became abusive.
After she had the baby, it got worse.
Steven was addicted to heroin.
Thrown into a life of drugs and violence, Tammy lived in fear of what Steven might be capable of and struggled alone to provide for her young son. She longed for any sign of hope. Then he hit her.
Could she escape?
Who would be there for her?
You’ll be hooked from the beginning because this isn’t your typical coming-of-age story and it’s based upon true events.
Reviews
” I loved this story, it was amazing!! It totally captured me from page 1. After reading the first few chapters I was addicted and couldn’t put the book down. I did nothing for the rest of the day” – Stewart Book Reviews
“It was so raw and the writing style was so beautifully written! Reading about her struggles made me feel her pain and heartbreak. It also made her human.
It is an inspirational story and she is a survivor!”
I loved it and would highly recommend it to everyone to read! – Amazon Reader

Jill is the fourth book in the Sabela Series but can easily be read as a standalone.

A sizzling suspense romance with a grand finale ending and where the power of friendship shines. 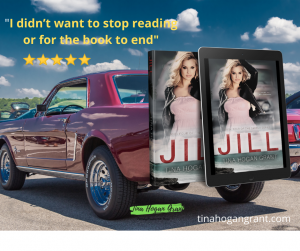 Jill Anderson wasn’t looking for love. After all, she just witnessed a horrific accident that left someone she was once close to fighting for his life.

How could she even think about anything but the seriousness of the situation?

But her mind immediately was drawn to Ricky, with whom she met for the first time as she waited in the hospital’s waiting room. Their eyes immediately locked, and Jill tried to ignore the mutual attraction she felt.

As it turned out, Ricky worked for her close friend Slater, and when he saw her again, he made his feelings known to her.

After being knocked down and pushed away by Jill not once but twice, Ricky swore he wouldn’t let it happen a third time and wiped his hands clean of Jill.

Realizing what a fool she had been, Jill knew she needed to find a way to win back his heart, but he wasn’t making it easy.

It was up to her to seduce him—something she never had to do before. Ricky put her outside of her comfort zone, and she didn’t like it.

She had one chance to pull out all the stops and do something wild and crazy that she hoped he couldn’t resist.

But what would it take, and how far was she willing to go to make him say yes?

Click the image to order the rest of the series 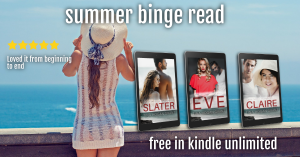 I am happy to announce that The Reunions – Tammy Mellows Series – Book 3 is up for preorder.

I can’t tell you how excited I am about this book. No matter how many books I write, watching them come to life and be available for you to enjoy is an unbelievable magical experience. It never gets old.

This is the final book in the Tammy Mellows series and what a journey this has been. I hope you have enjoyed reading them as much as I have enjoyed writing them.

The Reunions like the previous two books (Reckless Beginnings and Better Endings) are based on my life and delivers a strong message of the consequences of procrastination which I’m sure many of us can relate to.

You will reconnect with all the characters you have gotten to know in the previous books, Tammy and her two sisters Donna and Jenny. Her father John and let’s not forget her newfound love Dwayne and her son Matt. Rose her mother has one wish and Tammy wonders if time will be on their side.

Read the Blurb
Would time be on their side?
A mother’s wish. A daughter’s determination
Which one, if any, would be fulfilled first? Tammy, Donna, and Jenny were separated by divorce and divided by an ocean for decades. Their mother, Rose, had one wish—to see her girls together one more time. For Tammy, it would have to wait. She’s living out her dream as a commercial fisherwoman on the Pacific Ocean. But when a fishing trip goes wrong, she questions her future with the fleet. After two devastating deaths in the family, and when Tammy finds herself fighting for her own life not once but twice; the family takes center stage. She wants to make her mother’s wish come true.But did the sisters wait too long? Their mother’s health suddenly takes a turn for the worse.
Will she get to see her girls together one more time?You will notice the Amazon states that the book will be delivered to your device on March 31st. I can assure you it will be sooner. I had to give Amazon a date to set up the preorder.
When release day happens and it is delivered to you I hope it was well worth the wait. Thank you so much for your continued support and for letting me know how much you enjoy my books. It means a lot.
If you have not read Reckless Beginnings – Book 1 or Better Endings – Book 2 here are the Universal buy links
Buy Reckless Beginnings
getbook.at/Recklessbeginnings
Buy Better Endings
mybook.to/betterendings
And here is the Universal link for The Reunions
mybook.to/thereunions

Grab your FREE copy of Davin

Davin is the short prequel to The Sabela Series and it’s free when you subscribe to my newsletter. Not only do you get  Davin but I’ve also included chapter one of Slater which is book one in the series.

To get your FREE copy simply sign up here 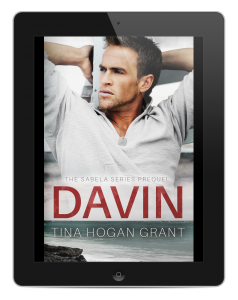 Life hadn’t been fair to Claire. Was that about to change?

Twenty-four-year-old Claire had never loved or been loved and had doubts that she ever would.

Estranged from her parents and her older brother, Claire lived a lonesome life as a dental x-ray technician and had grown a tough skin. She was independent and could pretty much handle anything life threw at her.

That was until she found herself helpless and broke and unable to fix her car that had once again failed her.

Travis came to her rescue that day. But what followed was not only unexpected but also complicated.

A relationship was born, but Claire feared it might end as quickly as it began.

Before the subject of love even came up he asked her for the one thing she knew she could never give him. How did that even happen?

How will he react when she tells him why?

And would it destroy what she believed to be her only chance at love? 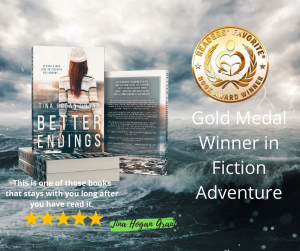 IT TOOK A NEW LOVE TO DISCOVER HER OWN DEMONS

After narrowly escaping with her own life from Steven, the father of her child, and an abusive heroin addict, Tammy Mellows believed she finally gained control of her own self.

She couldn’t be more wrong. When a new love interest enters her world, the relationship unveils hidden demons Tammy never knew she had, and fears they will destroy her newfound love with Dwayne, which had become the most important thing to her, other than her son.

Faced with unexpected challenges, she finds solace on the ocean and becomes a commercial fisherwoman—an industry dominated by men. Some of whom question her ability and stamina to make it through the season.

Still trying to cope with her own personal battles, she now finds herself facing high expectations in order to be accepted by the rest of the fleet, and for self-gratification, she must push herself to the limit.

Will Tammy overcome her demons and find happiness with her new love?

Will she succeed and prove herself enough to become a member of the fishery?

Or will it end up being too much, resulting in her losing it all?

Add Better Endings to your TBR list on Goodreads.